Vacuum Tubes Are as Relevant As Ever in Audio Design

When plastic digital watches were launched in the early 1980s, some folks predicted that classic analog watches would quickly bite the dust. Within a decade, they claimed, only museum curators and hobbyist collectors would have any use for traditional analog timepieces. Dump your stocks in Rolex, Tag, Breitling, and any other high-end Swiss watchmaker because they argued, analog wrist watches had one foot in the afterlife and the other on a banana peel.

By the early 1990s, digital watches were seen for what they truly were: cheap and disposable pieces of plastic junk that were made by machines for children and unsophisticated adults. Digital watches had no heart or soul. While they did tell the time, they lacked human warmth and emotional substance. As digital watches plummeted in value, analog watches made a roaring comeback. All over the world, folks reconnected with the tradition of quality and artisanship that is inherent to heritage timepieces. Boutique watches were once again widely regarded as something worth investing in.

The history of vacuum tube audio gear is quite similar. When transistorized circuits first appeared in the late 1960s, few consumer electronics companies continued making components with vacuum tubes. Mass-produced transistors and integrated circuit chips were the wave of the future. Transistors were cheap, readily available, and at that time, seemed to be the only economically feasible way to stay competitive within the marketplace. The one serious problem was, consumer audio gear that used transistors sounded harsh, sterile, and lacked human warmth. Just like digital watches, solid-state gear lacked human emotion and passion.

By 1970, Audio Research Corporation (ARC) and Dynaco were the only consumer electronics audio companies in the entire United States using vacuum tubes in their components. Why did ARC continue to do this? ARC’s CEO Bill Johnson adamantly believed that tube gear sounded significantly better than solid-state transistorized gear.

Let’s take a look at how Audio Research continues to push the limits of musical realism with its current, state-of-the-art range of vacuum tube-based components.

Why do vacuum tubes sound better than transistors?

The superior harmonic integrity preserved by vacuum tubes allows tube circuits to resolve ambient cues, instrumental textures, and the acoustical spacing of the environments in which instruments and vocals were recorded with a far deeper texturing, scale, and musical authority. 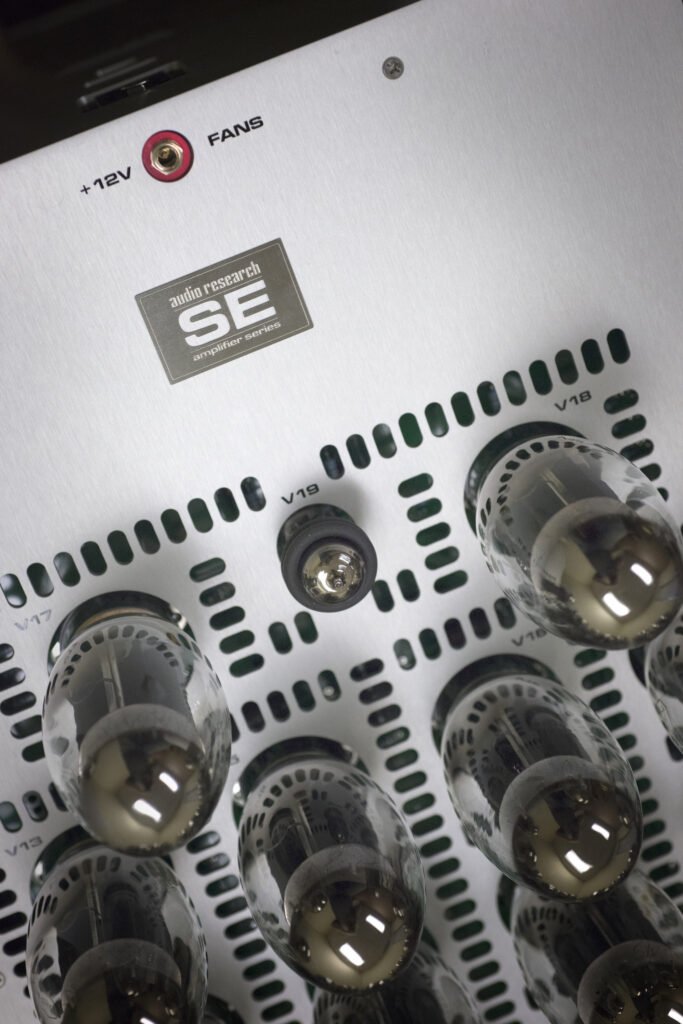 Audio Research’s tube gear aims to recreate recorded music as if it were occurring as a live event. This means that ARC’s tube gear is engineered to reproduce recorded vocals and instruments as close to the sound of real live human voices and instruments as possible. As such, all of ARC’s analog circuits use a carefully selected combination of tubes, FETs, and BJT devices to deliver spine-chilling realism within the sound.

When recorded music sounds “real”, there’s an instantaneous recognition—a compelling and emotional connection to the music—that is self-evident and undeniable. This soul-moving connection with the music is what a listener should get from their gear. We say “should” because, all too often, that connection just doesn’t happen. With top-shelf cables and speakers, Audio Research’s vacuum tube components allow recorded music to sound more like real-life musical events than most solid-state gear.

When recorded music reproduced through a 2-channel stereo rig sounds real enough to give you chills down your spine, it’s clear that the system is generating sonics that are close to those heard in real life. The lofty audiophile goal is to get instrumental timbres, imaging, soundstaging, dynamics, PRaT, and the overall *feel* of recorded music to sound so real that a listener can close his or her eyes and imagine being at a live concert.

As you might imagine, in order to achieve the highest levels of sonic purity, Audio Research invests copious amounts of time into the design and engineering of components. Like all other vacuum tube audio components in the market, ARC’s designs employ a combination of vacuum tubes and FETs. Vacuum tubes undergo a rigorous selection, burn-in, testing and matching process. Equally as importantly, FETs also need to be carefully sourced and matched, just like vacuum tubes.

Transconductance in vacuum tubes is defined as the change in plate (anode) current divided by the corresponding change in the grid (cathode) voltage when a constant plate (anode) to cathode voltage is applied. It is one of three measurable electrical constants of any vacuum tube. The other two are gain and plate resistance.

Audio Research expends a near fanatical effort to burn-in (48 hours), bench test, match, and then evaluate tubes within each piece of gear BEFORE releasing any specific component. Why do this…? By applying such strict testing and measurement standards to their tube sets, ARC ensures better sound and longer-term reliability from every unit.

For ARC, bench testing and matching vacuum tubes and FETs is taken as seriously as refining circuit designs. All tubes and FETs have specific manufacturing tolerances and electrical characteristics. 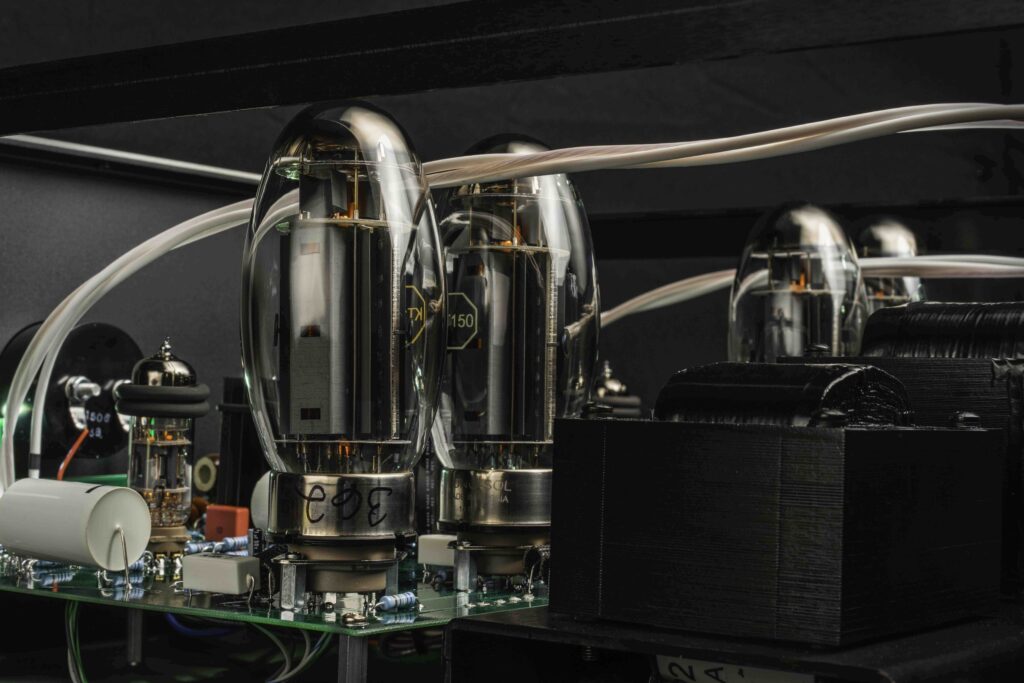 Germane to the empirical changes in transconductance which all valves exhibit as they burn-in, ARC selects tube sets based upon closely matched transconductance and other values. While using non-matched tube sets can create reasonable sound, tube values vary wildly and can be very difficult to match properly in a given circuit. ARC’s engineers and bench techs manically strive to achieve the best sound quality possible from every one of their components.

Making vacuum tube audio component ownership more friendly than ever, ARC uses auto-biasing circuitry that precisely dials-in and continually monitors the electrical current flowing through the tubes so that their tube sets are always operating at an optimal level. Not only does this eliminate the need for biasing individual tubes, auto-biasing circuits also ensure superior longevity for the tubes used in ARC’s gear. Correctly and accurately biased tubes will inherently have a longer lifespan.

Despite ARC’s love for vacuum tubes, ARC is not fixated on only using vacuum tubes. The company’s goal is to create the best sounding components that it possibly can. Accordingly, some of ARC’s units use a combination of vacuum tubes and FETs. The Reference Series of components, for example, uses FETs in the input stage to achieve infinitesimally low noise levels. The glorious sounding LS28 tube pre-amp also uses FETs in the input stage to lower noise levels. The CD6 CD player uses FETs throughout the signal path. The Reference Phono3 tube phono stage uses FETs extensively to achieve an exceedingly low noise floor.

In specific applications, sometimes using a hybrid mixture of FETs and vacuum tubes is a more practical solution to attaining a lower noise floor and the highest level of sonic performance. Ultimately, Audio Research maintains an open-mindset. Whatever sounds best within any given component is welcomed with freshly baked bread, organic cheese plates, and boutique bottles of wine.

Similar to vacuum tubes, FETs have notoriously wide manufacturing tolerances. As such, ARC buys small batch production lots of FETs that are pre-sorted for their specific needs. These FETs are bench-tested at ARC’s leading-edge manufacturing facility for transconductance and a myriad of other seemingly minor but equally important electrical characteristics.

The circuit designs in Audio Research’s amplifiers intentionally use low or no feedback. Less feedback innately results in a more realistic and musical sound. Before adding any feedback into the signal chain, ARC’s circuits are painstakingly crafted, obsessively tweaked, and carefully refined.

ARC’s amps seek to generate as much headroom as possible from any given tube circuit. Using enormous power supplies, sophisticated power supply rectification circuits, custom-fabricated components, and meticulous circuit board layouts, all of ARC’s amps are engineered to produce an enormously full, dynamic, precise, and concurrently musical sound without draining the power reservoir or being pressed into distortion as quickly as many solid-state amps do.

If you’re interested in learning more about Audio Research’s design process, be sure to check out our “What Makes Perfection, Perfection” story.

Audio Research has spent 50 years perfecting the design of vacuum tube audio components in pursuit of the highest sonic purity and listener engagement. We invite you to explore ARC’s state-of-the-art components on our Product Page.

Any cookies that may not be particularly necessary for the website to function and is used specifically to collect user personal data via analytics, ads, other embedded contents are termed as non-necessary cookies. It is mandatory to procure user consent prior to running these cookies on your website.